One of the (only) advantages to crypto taxes is that it makes me keep very detailed records of everything I do. So I had some fun looking back to my first ever tax return (spoilers – it was a tax loss) and the position that I recorded on 31 March 2018.

I did the numbers and I actually would have done well holding it, but only because I had Enjin, ADA and BNB which all did really well. I actually held very little BTC or ETH, because why hold those gems when instead you can have a winner like Elastos.

But most of the others did not so well, despite being more or less idolized at various times on this sub. And I confess, I thought they were pretty great too or at least worth a shot. This is probably a lesson that I learned, that unless you just want to hold BTC and ETH, do not expect your coins to be worth much if you are going to blindly hold for the next 4 years.

And it may seem like heresy, but with the benefit of hindsight, there is no reason why all the current upcoming and new gems (Sushi, Solana, Avalanche, Shiba, Axie, Luna etc) won’t be the Bounty-X, HST, Oyster, Nano, Verge equivalents of 2018 (and yes it pains me to put Nano in there but damn that was THE replacement for bitcoin as it was seen in 2017 or so).

So here is a grand tour of the “stinkers” from my old portfolio and how they held up:

This was a voting coin that would put democracy onto the blockchain. Are you sold yet? Well, have I mentioned they literally had a partnership with the UNITED NATIONS. Well that didn’t seem to help, it never really went anywhere, I don’t think the token had any real good tokenomics, and the team had an internal dispute and the project more or less collapsed. I think they were bought out but those old tokens were worthless.

Pearl was very similar to Brave / BAT, in that it paid you to browse the web. I think effectively your web browser became a mining platform, and it would reward you in Pearl tokens. It used tech similar to Nano or Iota / a block lattice type system. It even had an airdrop called “Shell”. Sadly some internal guy called Bruno had a back-door that allowed infinite printing and the coin / project collapsed into nothing.

If you think that price fall looks bad, let me tell you that I think I bought this thing after a huge dip. I bought the dip at around $113 per coin.

Elastos was praised as the next internet. Basically web 3.0. All I remember is people telling me that it would be integrated into Amazon itself and you’d be able to order items and do everything on the web via Elastos. I don’t know what they are doing these days but the price speaks for itself.

Walton Chain was one of the legendary “logistics / supply chain” coins which was a big use case at the time. I think some people thought it was related to Walmart because of the name. Walton Chain was going to be HUGE.

Waltcon had a melt-down moment with a “Free twitter giveaway” where they forgot to switch twitter accounts and it revealed they had given it to themselves. WTC never really recovered from that and I haven’t heard a single mention of it on here in years.

“We have suffered a stolen” was voted the top crypto quote for all of 2018. That quote was from “Bomber” who ran the infamous Bitgrail exchange that collapsed along with a huge percent of the Nano supply (I believe the Italian Courts are STILL working through claims years later). That downfall also dragged down Nano (in fact, a single badly translated tweet by Bomber knocked the price 42% in a day).

Nano was the 2nd top performing coin of the entire 2017 bullrun (Dark Doge, or Verge was #1). It used completely new tech, was fast free and instant. Originally it was called “Raiblocks” (I thought it was “Rail-blocks” which sounded better). I still have a thing for Nano, but unfortunately “coins as payments” has been superseded by things like the lightning network or the more exciting things like Defi, NFTs etc.

And the price today is actually not that bad compared to the rest here, BUT it had an all time high of around $35 just a couple of months before that $5.19 valuation. That’s a long time in crypto to get the gain above! And while the price above shows a small increase (before inflation) after 3.5 years, a huge amount of people ending up losing their hat in bitgrail.

Neo was also referred to as “Chinese Ethereum”. It made its holders very wealthy and it was set to become the next ethereum – it even had staking out of the gate! As far as I can see, Neo (along with others) never really got any kind of adoption, and it seems all the other layer 1 alternatives (FTM, SOL etc) and managed to supersede Neo, despite Neo having a four year lead.

It did have an amazing (short term) comeback when President Xi mentioned blockchain in a speech back in 2019 – oh those were the days.

ONT was a related coins to Neo (I think). Also a Chinese team. They had an airdrop where you would have earned around $10,000 just for reading their newsletter. And it had a pretty cool wallet with staking, NFTs etc. I think like NEO it just never seemed to really get any real adoption and got superseded by other shiny new projects – perhaps the lack of defi adoption hit ONT hard.

I don’t recall much about this one except it was a legendary Korean project that was going to fly. I picked it up based on the recommendation of a guy called “Jake the Crypto King”. Well it turns out Jake was not great at picking winners (I also got Snovio at his suggestion). I looked up Jake, apparently he left the crypto scene and got into Pokemon cards and was embroiled in a recent controversy regarding a fake pokemon card scam. I imagine there will be a bit more of these with “influencers” who are currently shilling alts.

The idea for GVT was brilliant. A platform where other people can manage your funds, and they have open trades in all markets. And due to blockchain, the funds are locked and can’t be stolen. So I invest 1 BTC with a legendary trader, who then trades into gold futures, tesla stocks, oil bonds and crypto and makes me a fortune. And there were leaderboards with rankings etc. And unlike other projects, GVT actually delivered a “working” project.

Well let me tell you, I used the GVT platform and discovered that there are many many other people that can lose money much faster than me. It seemed most of the managers there were absolute degens who managed to leverage themselves to hard and ended up with 99% losses. Who needs other degens to manage your money these days when you can just trade dog coins on Pancake Swap?

The other problem was that you could deposit money onto the GVT exchange using coins other than GVT. And while GVT had token burning, it was really really small in value.

We can’t have a 2017/2018 retrospective without mentioning EOS. The hype of EOS was like every single layer 1 and 2 project combined. It was THE eth killer and one of the largest ICOs in history.

When the blockchain finally launched, I must say it was confusing as hell. The wallet was very odd, it effectively gave you a borrowed computing power so it would show you your RAM, CPU speed etc. There were lots of mini-projects launching from day 1, but very few got anywhere.

The last big thing was Voice, which is kind of like Twitter but with a reddit moon system. As far as I can see, Voice launched, was fairly un-useable and then was abandoned. There is also a new exchange opening (called Bullish I think) but its hard to see EOS ever making it back.

Wabi was a Chinese project with a fairly cool idea, effectively supply chain type stuff but rewarding customers for buying or scanning goods I think. It performed really well for a while with news as to Chinese trials in cities but never seemed to really get anywhere. Like many projects, I wonder about the tokenomics of this. Plus I quite liked the name Wabi, why change that?

PivX was a strong coin during the privacy coin craze where all privacy coins skyrocketed in value. And PivX had staking!

The reality is that like many of the older privacy coins, people never really seemed to use them for that purpose, and there were too many (think dog coins in 2021). Plus it had a broken wallet that would cause issues whenever there was a hard-fork. I think these days people prefer the convenience of tokens that are on other chains and easy to manage with wallets like metamask.

This project had a genuinely good idea. Auditing of smart contracts. Brilliant and absolutely needed for DEFI today. There was only one problem, the coin didn’t seem to have much of a purpose. At first, the idea was that you would only pay for their services using this token which would drive the price up. But then they started accepting payment in USD – so what was the point?

This was a really common theme of 2017 – “utility coins” which were a currency for a certain project – for example, Denta Coin was a coin that you would use to pay for the dentist. That would in theory inflate demand and the price of the coin, but that type of tokenomics never really worked.

Of all the coins here, this is the one I remember the least. I think it might be related to Tron, and all I remember is that it got shilled by a guy called Crypto Staker that had Gandalf as his Avatar. I guess never trust a wizard in crypto.

Does anyone else have any old 2017/2018 gems that either they are HODLing to the grave or that they might have otherwise forgotten about until now?

(This happened to u/kundeistkoenig, translated by me into English # Comdirect is a German bank operated by Commerzbank) After my EC card was unexpectedly rejected… 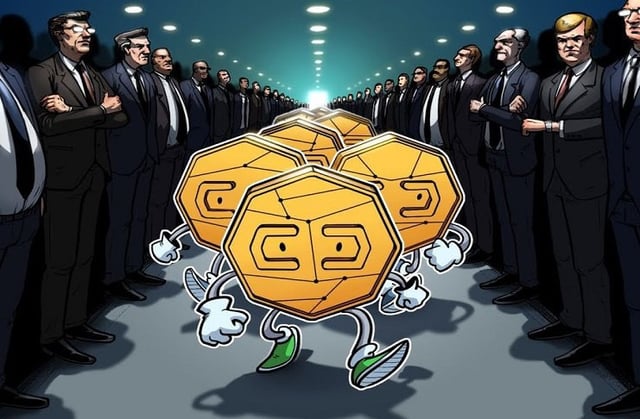